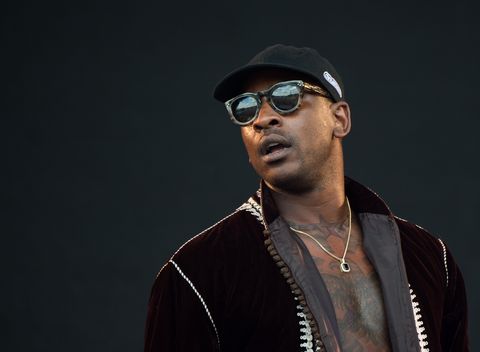 Adele is rumored to be sending her love to a new lover—but it’s not exclusive. After a source close to the Grammy winner told People that she was dating dating fellow musician Skepta (real name: Joseph Junior Adenuga), Adele clarified reports on Instagram.

She shared a photo of herself hosting Saturday Night Live over the weekend with a caption that reflects on the experience, wishes the U.S. good luck with its election and confirms her single status. “I’m going back to my cave now to be the (single) cat lady that I am! Peace out til next year ♥️” Adele ended her post, denying rumors that she’s in a confirmed relationship with Skepta.

This is the first man Adele has been linked to after her April 2019 split from husband Simon Konecki. According to the People insider, “things have been heating up” for the couple lately, nearly a year after The Sun first linked them together. “They run in the same circles in London, and she’s having fun,” People‘s source added, citing their bond over raising young children and living in Tottenham, London.

Ahead, seven things to know about the London-born Skepta and his long-running romance rumors with Adele.

While Adele and Skepta’s music styles may be wildly different, neither is a stranger to acclaim. Skepta has belonged to rap groups including the Meridian Crew and Roll Deep. He’s released several mixtapes and albums, including 2016’s Konnichiwa, which won the Mercury Music Prize for Album of the Year, beating out artists including David Bowie and Radiohead.

Like Adele, Skepta is from Tottenham in North London, a fact that the two may have bonded over.

He was first linked to Adele in October 2019

The Sun first reported Skepta and Adele were an item about a year ago. Per the outlet, the pair celebrated the rapper’s 37th birthday at the Crystal Maze in London and were “spending more and more time together.” A source told The Sun, “Adele and Skepta have been there for each other a lot after both their relationships split up. They have a close bond and there’s definitely a special connection.”

Rumors about their relationship cooled down in 2020, but speculation heated back up because of a June Instagram comment from Skepta. Adele shared photos of herself watching a re-airing of her 2016 headlining performance at U.K.’s Glastonbury festival. “5 ciders in 👌🏻” she captioned the post, which included a picture of her re-wearing the Chloé dress from that original performance. Skepta casually commented, “Finally got your Instagram password lol,” which led some to believe he either took the photos or helped post them.

He and Adele have a long history

While a source tells The Sun, “Some of their friends are hoping and predicting they could end up being a great couple one day,” these two already have a history has friends. In 2016, Skepta told ES Magazine, “Adele texts me all the time and keeps me in check. She speaks to me about how things are going.”

Soon after, Adele shared a photo of the rapper with the caption, “Tottenham Boy” alongside a heart emoji. Skepta retweeted the message and wrote “love you” next to an emoji of a red rose. He later told IBTimes UK, “She gassed me up. One day I was just chilling and she [tweeted] a picture that said ‘Tottenham boy’ and she’s from Tottenham as well. I was actually going to quit music that day, that was one of the sickest things ever. She’s like the lady of Tottenham.”

In the past, Skepta has been linked to another high-profile UK celebrity: Naomi Campbell. They seemingly confirmed their relationship on the cover of British GQ in March 2018. The Sun‘s report claimed that the couple broke up in 2018 after Campbell learned Skepta was expecting a child with another woman.

It appears that there’s no ill will between Adele and Campbell. In August, she shared a photo of herself honoring the Notting Hill Carnival. In the pic, she wears a bikini top with the Jamaican flag printed on it. Campbell commented, “♥️🇯🇲♥️🇯🇲.”

Some have speculated that Skepta wrote a song about Adele

On March 27, Skepta released Insomnia, a collaborative album with Chip and Young Adz. One track in particular seemed to reference his past relationships with celebrities, including Adele and Campbell. “Mic Check” includes lyrics, “Can you handle the fame?/”You know you’re f*cking with a star”/When you’re f*cking with me, they talk about you in the press.” Skepta hasn’t confirmed the subject of the lyrics.

A source explained to The Sun that Adele and Skepta “are both private about their love lives and they are both committed to their children first and foremost as well.” Adele is a mother to her almost 8-year-old son Angelo, while Skepta welcomed his daughter, River, in early 2019.

Jennifer Lopez on Everything You Need to Know About JLo Beauty

4 Timeless Coats to Wear This Winter

Jennifer Lopez on Everything You Need to Know About JLo Beauty

4 Timeless Coats to Wear This Winter

If you haven’t Heard of Wolf and Badger yet, It’s My One-Stop Shop For Gift Shopping This Year